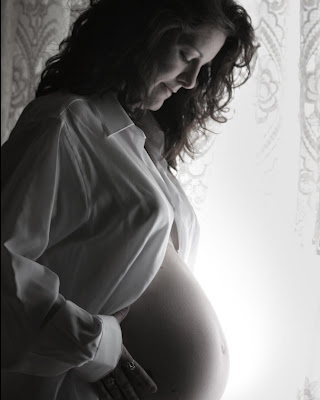 A few days ago, it suddenly came to my realization that I alone, out of +78 million Egyptians, know of six pregnant women. The imminent enfegar sokkany is not really my concern here...it's the wonder of having a life growing inside of you that captures me. How does a woman feel when she knows she's pregnant? And that, come a few months, she will actually bring a baby into this world? How does it feel to feel it moving, or its heart beating? To see her tummy growing every night...her skin stretching...her health failing...women envying her on the street as she proudly takes slow steps down the road...

M is tiny and frail. She married really young, and often regretted doing so; "Ana mashya l7ad delwa2ty bl satr," she once remarked, not because of financial issues...but because she was not yet ready to bear the responsibility...
"I'm pregnant," "Congratulations-" I hadn't completed before she continued.."Well, don't be so happy, the obstetrician told me I might have a miscarriage any moment now, and that I have to rest." I felt sorry for the aborted happiness. M seems for a lot of people that she has the world-a great job, great husband, great house, fairytale wedding- so to have a second miscarriage can balance matters...doesn't it? No one's life is perfect, even perfect-looking people have hardships. We just fail to realize that, and find it much easier to envy them instead.
I haven't been able to reach her for a week...Even then, I'm dreading hearing unfavourable news...May the life inside you grow, M!

N loved her husband so much. She was frustrated when her parents rejected him at first. However, being the stubborn child she has always been, she had her way and married him, and her parents let go and blessed the marriage.
One night, she called her sister, screaming: "Come get me! I can't bear this anymore! 7asby Allah w ne3ma el wakeel! 7asby Allah w ne3ma el wakeel! I'm fed up! He doesn't care about me any more! I want a divorce! I want a divorce!"
A week later, she spoke of how her husband is an angel who feeds her with his own hands when she gets ill, and of all the virtues her blessed husband possesses. Don't ask. She's a Gemini.
"I will call her Dana," she softly told her brother about the coming baby. That seems like a really sweet name, I didn't object. But then...she started bleeding. She was told to rest for a few days, then undergo some tests to check the foetus' health...
"I saw something like a baby in the toilet," she sadly told me. I froze in horror but quickly told her, "It can't be. Don't worry, everything is going to be fine." Whatever the ailment or mishap, we always tell each other that everything will be okay. What if it doesn't? What if evrythign turns for the worst, as it very often does? Why do we have to lie just to comfort ourselves and comfort others?
"N got a sa2t," I heard mom say...and felt disgusted at the word. Sa2t, like failure. No, it's not sa2t. It's eghad. A miscarriage she will overcome, and she is still young and fertile and will make another one. Yes, inshaAllah she'll make another one.

I didn't know she was coming. Hell, I didn't even know her. My own student. So I didn't bother either about how I look or what time I arrive at college. I suddenly found a young man asking: "Dr N?" He had a crying baby and a young, beautiful wife. She seemed older than me, still. She asked me, three days before her exam, what the syllabus was all about. I told her in a nutshell, and noticed that she was neither listening nor aware of the situation...It is straight madness to try to explain a syllabus in ten minutes. I wondered to myself...what was she thinking? She started to sway...and unpinned her Hijab...her husband told me..."She's pregnant, and she sometimes gets dizzy," with a pride he couldn't hide. So, here was a girl who couldn't wait for some two years to get married...and just be through with all her studies before starting a serious relationship...but what do I know? Over there in Banha...maybe she was indirectly pressured...maybe she got too many proposals (C'mon, she's fair) and was fed up and gave herself up to this relatively handsome young man. But how, how, how on earth was she supposed to look after her eastern hubby who would probably not make a cup of tea for himself, look after a baby, look after herself and her unborn child, do the cleaning and the cooking, and study?

When I knew that A is pregnant, I exclaimed, "A child bearing a child!" True, A was a naughty girl, she sometimes wore her little sister's clothes to college, just because they look fashionable. She was loud and friendly, she was brave and honest. She had lived most of her life in Qatar and would probably go back as soon as she had finished college. I sometimes found her mysterious, which even made her more attractive. I'm a sucker for mysterious people. A, her hubby, is almost the same. He would make us laugh whenever he opened his mouth, nay, even by looking at him. By fourth year it was clear enough they were in love, but we weren't sure just how lucky they would be. Her mother, a dictator, refused his proposal at first, claiming he's not good enough for her. However, they somehow managed to get engaged, then married a few months later. Now, I can't help laughing and wishing them luck when I think of A, pregnant, overweight and absolutely stunning, reclining in a big armchair, unable to move the two babies inside her alone, so instead lets her husband do most of the housework. Her husband, who used to join us in playing cards at college not too long ago...who will be a father in a few weeks
I love you guys!

Also pregnant is our friend Ingy. I'll probably see her on Tuesday and get spell-bound; she's in the third trimester.

Wild at Heart
Rebel with good causes ... refuses to be categorised or contained.